Nu Skin Is A Scam: True Or False? (Honest Review) 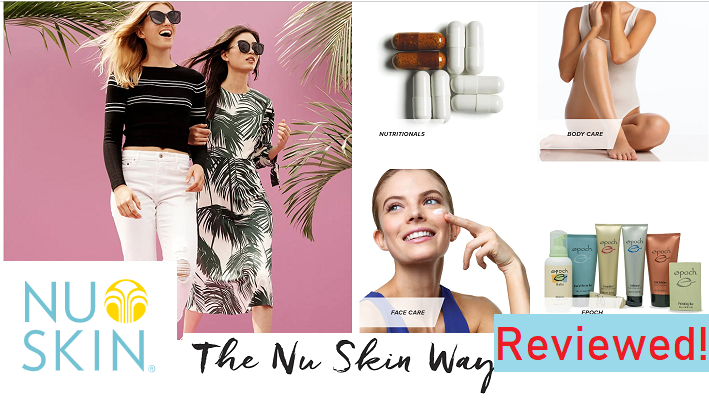 One of the biggest MLM Businesses around that has been operating is many years is the Nu Skin. But is it really a good business opportunity? Or just a scam or a pyramid scheme?

Hello, I’m glad you’re here reading this post as this is made for you if you’re looking for a legit and sure way to make money from home.

Doing research before diving into any opportunity is the best way to gear up ourselves against online scams. So, I promise you to deliver every information that you need about Nu Skin to help you decide whether this business is the right one for you.

I’m not associated with Nu Skin, so you can rest assure that this review will be unbiased and honest.

Nu Skin Is A Scam: True Or False? (Honest Review)

Summary: Nu Skin is a multilevel marketing (MLM) business with high quality beauty products and it’s definitely not a Scam BUT you should NOT join if you really want a profitable home-based business.

Multilevel Marketing (MLM) businesses have a very low success rate of 1%. This basically means that more 99% of all who join an MLM business lose money.

If you are interested in a home-based or online business, you need to check out Wealthy Affiliate. This is the single best place to learn how building a profitable online business really works. This is also where I gained all my online business skills and learned how to earn up to $1,174.09 in one day.

What Is Nu Skin?

RNu Skin is an international MLM business that develops and sells cosmetics, nutritional, dietary and personal care products. It has been operation since 1984.

Nu Skin Entreprises Most Popular Brands are the Pharmanex and the Nu Skin – including the AgeLOC, Nutritional Products, Vitamin Supplements and Weight Management products.

Behind these numbers are the hardworking affiliates and marketers associated with Nu Skin. Whether these associates are earning money or not, is another story. I’ll get back to that later.

There have been several issues about the Nu Skin that make people think that it is a scam. Some of the legal problems that Nu Skin had faced previously were:

1990 – the Federal Trade Commission (FTC) investigated Nu Skin due to complaints of its multilevel marketing practices.

1992 – Nu Skin settled with five U.S. states that had accused the company of deceptive advertising and overstating the income earned by distributors.

1994 –  due to FTC investigation, Nu Skin paid $1 million and signed a consent decree prohibiting it from making deceptive or unsupported claims about its products.

1997 – Nu Skin paid another $1.5 million to the FTC to settle ongoing allegations of unsubstantiated promotional claims.

2014 – the Chinese government announced that Nu Skin will be investigated due to a People’s Daily newspaper report calling it a “suspected illegal pyramid scheme.”

2016 – Nu Skin paid a $47 million settlement for operating a pyramid scheme after being sued by China in a Utah federal court. More so, Nu Skin was also obliged to pay another $750,000 for bribing a top Chinese official with funds from Nu Skin’s charitable division after a U.S. Securities and Exchange Commission probe.

Nu Skin Reviews: How To Join?

To join the Nu Skin Team and become a Brand Affiliate, you need to buy an introductory package. The price can range from a little bit over than $100 up to $1,291.50 according to the product package you want to.

The steps are very easy. 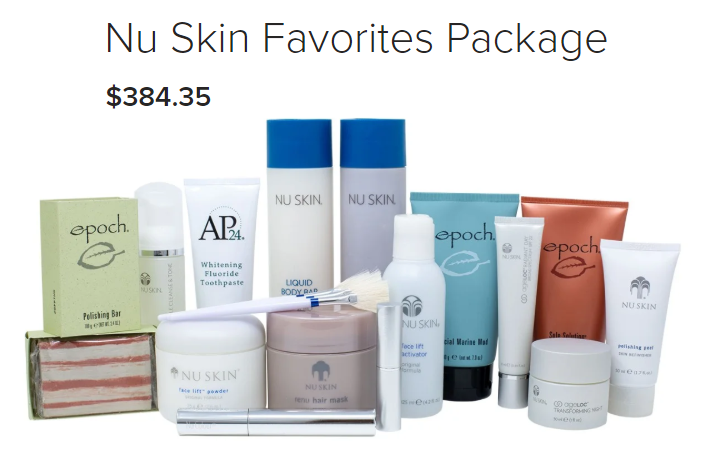 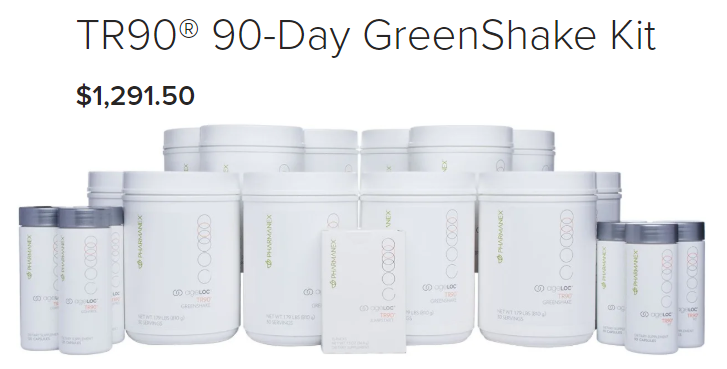 Just like any other MLMs, generating a full-time income with Nu skin is quite complex and far to be easy.

There are 2 fundamental ways of earning money with Nu Skin: By reselling products purchased from the company to consumers; and Through sales compensation.

If you have seen their compensation plan, it’s actually an income disclosure for 2018 and it serves as a disclaimer as well since Nu Skin have had issues for misleading compensation of their Affiliates in the earlier years.

More facts to chew in:

Computation of the real success rate:

This is much lower than the average of 1% success rate of all MLM Businesses.

Get started with the best training program in online business – this is where I learned to earn up to $1,174.09 a day.

Why is it hard to earn a full-time income with an MLM business?

The Above video is just one of the complicated compensation plan that the Nu Skin has to offer.

So, let say your desired full-time income is equivalent to a decent $5,000 a month. If you are a Member or a Brand Affiliate (in case of Nu Skin) that earns 5-20% of your personal sales, then you need to sell $25,000 worth of products every single month (considering you’ll get the 20% commission).

The main challenge in selling the MLM products is that they are relatively expensive compared to the products outside MLMs retail market – and people who buy these products are mostly those who patronage the products itself. And you bet they’re not that many. To sell $25,000 a month with direct selling is nearly impossible.

Another thing is, they’re a lot of affiliates or members of the same MLM company everywhere. Yes, even in your own town. So, the competition is high because the other distributors are basically on your team (your crossline) when you just got started.

What’s your last option? You need to RECRUIT new members/affiliates who will pay that high introductory package,  face the same problems and then quit after a couple of weeks or months max.

Is Nu Skin A Pyramid Scheme Or Scam?

This is one of the biggest questions that people have when they hear about Nu Skin and it’s business practice. In fact, Nu Skin has faced this problem and paid a high price in the previous years.

So, the good news – after all the allegations and legal issues, Nu Skin is still considered as a non-pyramid scheme. In short, it’s a legit MLM business after the settlement with the FTC and with the court in Utah with had cost Nu Skin for more than $50Million so far.

The bad news is – a lot of people still think it is a pyramid scheme and scam. And that makes it more difficult for new brand affiliates to achieve success in the Nu skin business.

Take a look at this illustration: Unfortunately, this is exactly how Nu Skin and all MLM Business Models Look like.

Therefore, the people who join Nu Skin or any other MLM business end up focusing on RECRUITING because that’s where the money is in the end (which is the main element of a pyramid scheme).

And those who do the direct selling stop because they realize soon enough that it’s just a waste of time since their goal was to earn a consistent full-time income.

That’s almost impossible with the direct selling alone because there are a lot of distributors in the same area and the retail price of the products are too expensive for the non-members.

How To Spot A Pyramid Scheme?

People get often confused about whether a company is a pyramid scheme or a legit MLM. Unfortunately, it’s not easy to distinguish one from the other.

Let’s take a look at the short video below explaining about pyramid schemes. 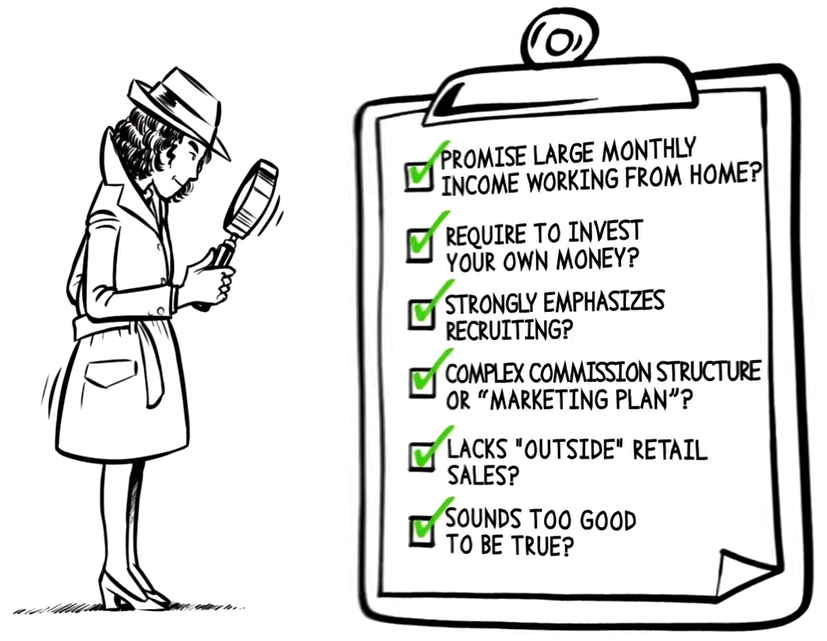 If you’ve read my bio, you’d probably remember that I tried at least 3 MLM businesses for many years.

Probably I thought that it was as easy as they presented it to me and maybe because I thought it’s a quick fix business.

My last journey with an MLM business was actually the “nicest one” (among the others)- great products and a good company. But no matter how great the products were and how active I was – I didn’t make a fortune.

But you know what was the BIG problem then?! As the team became bigger, the communication became more difficult. The further the downlines were, the more difficult it was to be connected.  Which means, the recruits of my recruits’ recruits were no longer connected to me. So, once they stopped working, the business died.

Here’s another static to digest on: Of all the people that do make money, the average YEARLY salary is only $2400. That’s only $200 a month or around $17 a day. And Nu Skin is not exempted at all – this is proven to be true through their income summary.

That success rate is even lower than 1%. Nu Skin has a success rate of only 0.14%. Which means more than 99% will never reach a higher level in the ladder.

Pros And Cons Of Nu Skin

I honestly hope that by now I’ve talked you out of joining Nu Skin. Nu Skin and its products are good. Unfortunately, MLM is such a broken money-making system and extremely hard to succeed with.

Talking about my experience with at least 3 different MLM businesses over the years, I know it’s not an easy business model, especially if you don’t like product demonstration tasks, direct selling, business presentation and bothering your families and friends over and over again.