What Is Coway? (A Dream Or A Scheme?)

If you are interested in Coway either as a customer or a job seeker, then this post is for you.

Welcome to today’s business review: “What Is Coway? (A Dream Or A Scheme?)”

I’m glad you’re here to find out more information about Coway. In this review, I will be walking you through about the company’s background, products and services, the job or business opportunity and a lot more.

After reading this business review, you will definitely find out whether or not to become a Life Care Specialist (that’s what they call their salespeople) or become a customer.

What Is Coway? (A Dream Or A Scheme?)

Coway is one of the leading direct selling/multi-level marketing companies in Water and Air Purifiers. It is originated from Korea back in 1989.

Overseas Branches: Thailand, Malaysia, USA, China, Indonesia, and Netherland. The company is expected to branch out to different countries worldwide.

In 1989, the Woongjin Coway (Coway Co., Ltd.) was established and started with the Door-to-Door (direct-selling) marketing model where hey sold Water Purifiers. By the end of 1997, they managed to earn the WQA Gold Seal Trademark, establish a Research and Development (R&D) Center, complete building Yugu plant (big production building) and obtain a lot of certification and recognition locally such as Guinness’ Certificate, ISO, etc.

In 1998, Coway started its rental business and the success has become even more unstoppable. By the end of 2004, its sales have exponentially grown, establish the first overseas business branch in Thailand and joined the 1 Trillion Won Club of Sales.

Customers can rent equipment with Coway, any choice of air purifier, water purifier and water bidet/softener.

The rental fee depends on who much you are willing to pay in downpayment and the product’s price. There will be a penalty for late-payments and discontinued contracts.

Who can rent Coway’s equipment?

The requirements depend on whether you are applying for private rental or a business leasing. Read more here.

Coway Reviews: Who Is Cody?

How to become a Cody?

Below is a very nice demonstration of what it takes to become a Cody – an online commercial.

One thing I noticed about Coway marketing strategies is the effective sense of humor on how they call their front line employees which people can easily remember.

As Coway launched its vision as LifeCare Company – the front liners are called a bit in life with health. Aside from Cody, they also have the CS Dr and the Health Planner (HP).

Who are these CS Drs and HPs?

Just like any other MLM company, the Coway compensation plan can be quite complicated as it offers different kinds of commission according to your personal sales and the sales of the people you sponsor in the company.

Yes, you need to RECRUIT people in order to build your marketing team and climb up to the position ladder.

Basic Commission 15% – This is a flat rate for all your personal sales.

You will also get a rental commission for all your personal sales with the same commission rates for Basic and Bonus Commissions.

Coway offers different travel incentives and monetary awards when you meet certain sales quotas required in a given period of time.

As you climb up to the position ladder and your marketing organization becomes bigger and bigger, you will also earn a commission from the people under you.

Take a look at the illustration below or see more about Coway Marketing And Compensation Plan here. 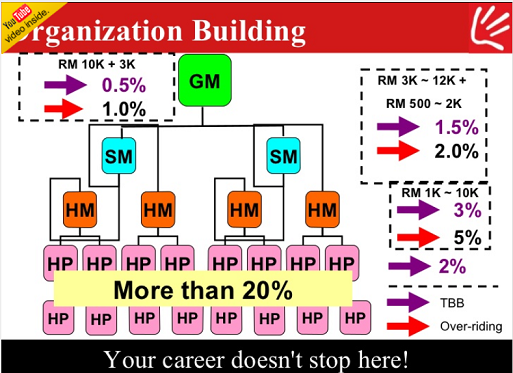 Is Coway A Scam Or A Pyramid Scheme?

This is one of the biggest questions that people have when they hear about Coway and it’s marketing practice.

So, the good news – Coway is a legit direct-selling and multi-level marketing business with a solid track of success since 1989.

The bad news is – there are still a lot of people who get confused about their business practice as people think that all MLM businesses are scams and pyramid schemes.

Take a look at this illustration: Unfortunately, this is exactly how Coway Model Looks like.

Therefore, the people who join Coway for business purposes or any other MLM business are ending up in focusing on RECRUITMENT because that’s where the money is (which is the main element of a pyramid scheme).

There are, of course, some exceptional people who are lucky enough to be one of the pioneers in any multi-level marketing business. Unfortunately, the new members have to chew on the fact that there are only 1% who earn money and 99% lose money in MLM business.

So, what is Coway?

It an MLM company with a good track of revenue records selling primarily different types of air purifiers and water purifiers.

Is Coway A Scam? Absolutely NOT.

Is Coway A Dream?

Yes. If you really love direct selling and multi-level marketing, then this is perfect. Let’s admit that there are just people who are lucky born to be sellers- they love talking to different types of people, networking, product demonstration and they don’t even mind bothering their family members and friends about the business.

However, if you are like me who is exactly the opposite. Don’t like sales talking, bothering families and friends, hates product demonstrations, public speaking, then you need to think twice.

No. Coway is indeed a legit MLM company. However, MLM companies are commonly mistaken as pyramid schemes and scams, which makes people scared to talk about the business because of the fear of rejection and to be called a scammer.

I have tried 3 MLM businesses in many years, so I know that the MLM business model is not that as easy as they present it. Because the truth is MLM business is a broken business strategy for ordinary people like you and me, who just want a peaceful and quiet work environment (at least in my free-time for my online business – wink).

I honestly hope that I have talked you out of becoming Coway’s Health Planner (Salespeople).

There is definitely a much better way of earning money from home. Check out below.