Is Young Living A Scam? [Honest and Unbiased Review] 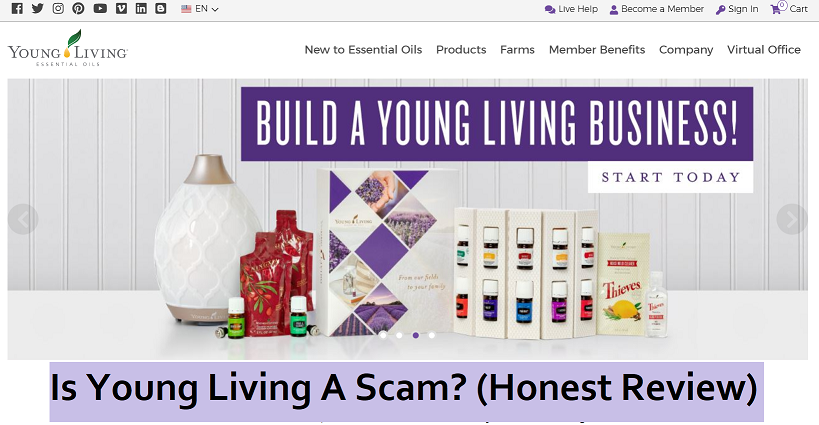 Interested in Young Living Business Opportunity but confused about whether you should join or not?

Then, you’re at the right place as I want to answer most of the most important questions of this business and why some people think it’s a scam or a pyramid scheme.

Is this business right for you?

How To Earn Full-Time Income WIth Young Living?

Is Young Living A Pyramid Scheme?

Is Young Living A Scam? [Honest and Unbiased Review]

Summary: Young Living is a multilevel marketing (MLM) business and definitely a good company with great products. But, you should NOT join if you really want a profitable home-based business.

Multilevel Marketing (MLM) businesses have a very low success rate of only 1%. This basically means that 99% of all who join an MLM business lose money. And yes, Young Living is not exempted and its success rate is much lower. It’s only 0.177%. See below.

What Is Young Living?

Young Living is a Multi-level Marketing (MLM) business that sells essential oils and other related products.

It is based in Utah, USA and founded back in 1993 by  Donald Gary Young, a controversial public figure previously convicted for the unlicensed practice of medicine.

Just like doTerra, Young Living had some issues with the U.S. Food and Drug Administration in 2014. The company was warned  over the illegal marketing of its products as treatments or cures for Ebola, and other conditions, including “Parkinson’s disease, autism, diabetes, hypertension, cancer, insomnia, heart disease, post-traumatic stress disorder (PTSD), dementia, and multiple sclerosis.

Nevertheless, Young Living has been generating high revenues over the years. In fact, their reported revenues for 2017 & 2018 were at $1.5 Billion and $1.9 Billion respectively.

Young Living Reviews: How To Become A Member?

In order to do the Young Living Business, you need to register and become a member by buying a starter kit, which will cost your between $45-260 according to your choice of starter kit.

How To Earn Money With Young Living?

Just like any other MLMs, generating a full-time income with Young Living is quite complex and far to be easy. It’s nearly impossible BUT still, it is possible.

In order to earn commissions, you need to generate personal sales and build your team. And mind you, the sales quota is not a joke.

How much can you possibly earn as a member doing this business?

A major thing that all MLM businesses have is the overwhelming compensation packages that they offer to the members. Of course, they have to do this- Otherwise, nobody will be interested in joining their MLM sales team.

With Young Living business, aside from the Fast Start Bonus, Starter Kit Bonus, ER Enrollment Bonus & Retail Earnings, you will be offered an overwhelming compensation packages while: Creating a Foundation, Building Your Business and Developing Leaders.

In order to earn money with Young Living business, you need to meet the requirements in every level. See the compensation plan below: 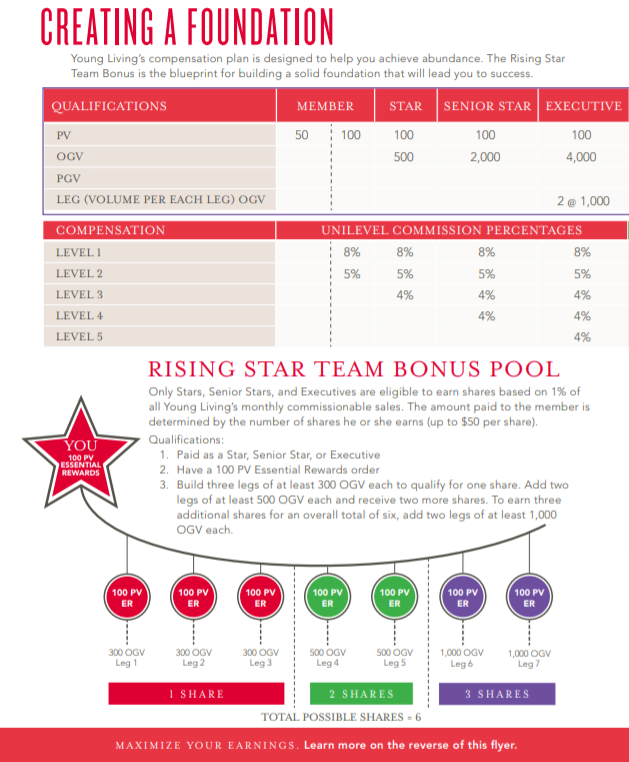 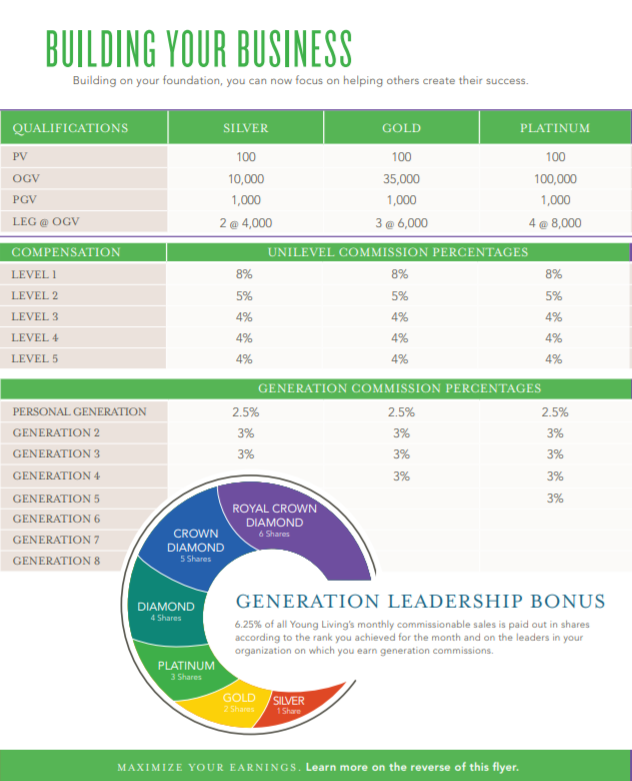 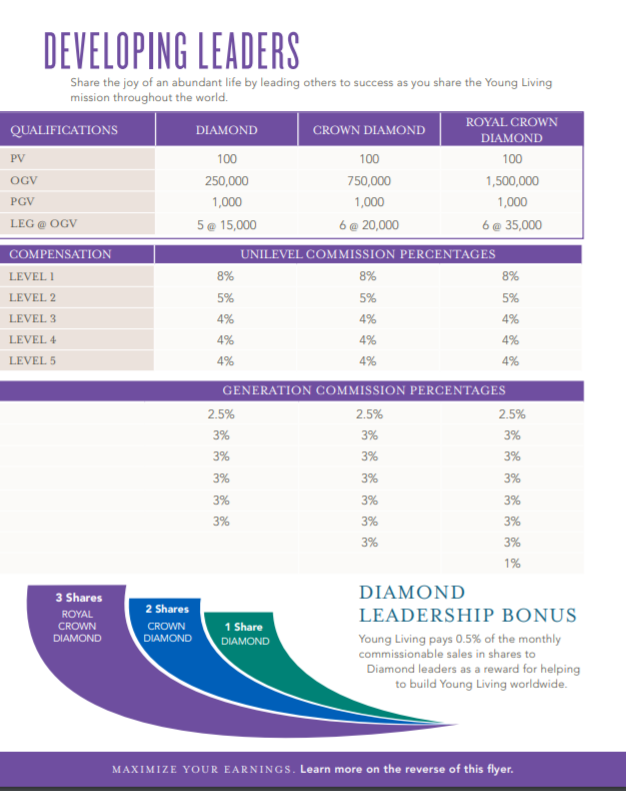 Overwhelming? I think so.

If you are an experienced super seller, then this compensation plan will be great for you. But if you are a complete newbie in MLM business, then think again.

In order to earn money with Young Living, you need to recruit a lot of people and the people you recruited must do the same. NOT only that. You need to meed quotas – the personal volumes (PV), organizational volumes (OV) and personal group volumes (PGS) MONTHLY sales!

That’s A LOT of selling and recruiting.

Are recruiting and direct selling not your cup of teas?

Let’s say you decided to pursue this business, let’s see look even closer to Young Living Earnings Disclosure from 2017 (latest report at the time of this review) and see how much people are earning doing this business.

There are only 10.5% of all members who are doing this business.

Only a part of 3% of 10.5% business builders are earning full time income. see more below.

Of all the 5.6 million members around the world, there are only 0.016% who are earning an average of $1.7 million a year and that’s after doing the busing for more than 8 years.

Let me compute the overall success rate of Young living. Include all who are earning a decent full-time income of above $60,000 per year.

If you do this business, you need to dedicate at least 5 years before you can earn a full-time income. This is absolutely not a quick rich scheme, so you need skills, training, a lot of recruitment jobs, direct selling and organisational management.

In my humble opinion, it is a great opportunity for those who are born sellers but not for ordinary people who are not comfortable with public speaking, recruitment and direct selling.

Okay. Let’s do the math. Without recruiting it’s nearly impossible to earn a full-time income.

So, let’s say your desired full-time income is equivalent to a decent $5,000 a month. If you are a distributor that earns 25% on your personal sales on retail price, then you need to sell $20,000 worth of products every single month.

The main challenge in selling the MLM products is that they are relatively expensive compared to the products outside MLMs. The people who buy these MLM products are mostly those who patronage the products very much. And you bet they’re not that many. So, to sell $20,000 a month? It is nearly impossible.

Another thing is, they’re a lot of distributors of the same MLM company everywhere. Yes, even in your own town. Plus, the internet’s selling option too! So, the competition is high because the other distributors are not on your team (your crossline) when you just got started.

So, people joining an MLM business are ending focusing on recruiting new members because that’s where the money at.

What’s even harder with the Young Living business is all the monthly sales quota that you need to generate in order to maintain your title and earn a commission.

Plus, you need to RECRUIT new members who will be facing the same problems and then quit after a couple of weeks or months max.

What will happen to the business then? D.E.A.D.

I was hard-headed. Even though my father said to stay away from MLM businesses, I didn’t obey him. I thought I could prove that I could do it anyway if I just work hard. If you’ve read my bio, you’d probably remember that I tried at least 3 MLM businesses for many years.

Probably I thought it was that as easy as they presented it to me or maybe because I thought it was easy to sell great products even they are expensive or probably because I couldn’t say “no” to the person who invited me to join the business.

My last journey with an MLM business was actually the “nicest one” – great products and good company. But no matter how great the products were and how active I was – I didn’t make a fortune.

As the team became bigger and bigger (my downlines were crosslines to each other, right?!), the communication became more difficult. The further the downlines were, the more difficult it was to stay connected. Which means, the recruits of my recruits’ recruits were no longer connected to me. So, once they stopped working, the business died.

BUT honestly, you’d be better off if you build your OWN business than joining an MLM business. I should know, I tried this business for many years.

Why Only 1% Make Money With MLM Business

Unfortunately, this is how mlm business works. An MLM business becomes just legit when the company can give a legit arguement that distributors can earn commission by doing direct selling (selling of the company products) without recruiting. But “how much” a distributor can earn is not the issue of legitimacy of an MLM business.

Here’s another statistic to digest on: Of the people that do make money, the average YEARLY salary is only $2400. That’s only $200 a month or around $17 a day.

I honestly hope that by now I’ve talked you out of doing the Young Living Business. Young Living and its products are definitely good.

Unfortunately, MLM is such a broken money-making system and extremely hard to succeed with.

Talking about my experience with at least 3 different MLM businesses over the many years of hard work, I know it’s not an easy business model, especially if you don’t like product demonstration tasks, direct selling, business presentation and bothering your families and friends over and over again.

Wealthy Affiliate is the best place to learn how money-making online works and it has taught me how to earn up to $1174.09 a day after 6 months of training and consistent work without living my home.

By continuing to use the site, you agree to the use of cookies. more information